A room control panel for HomeKit. 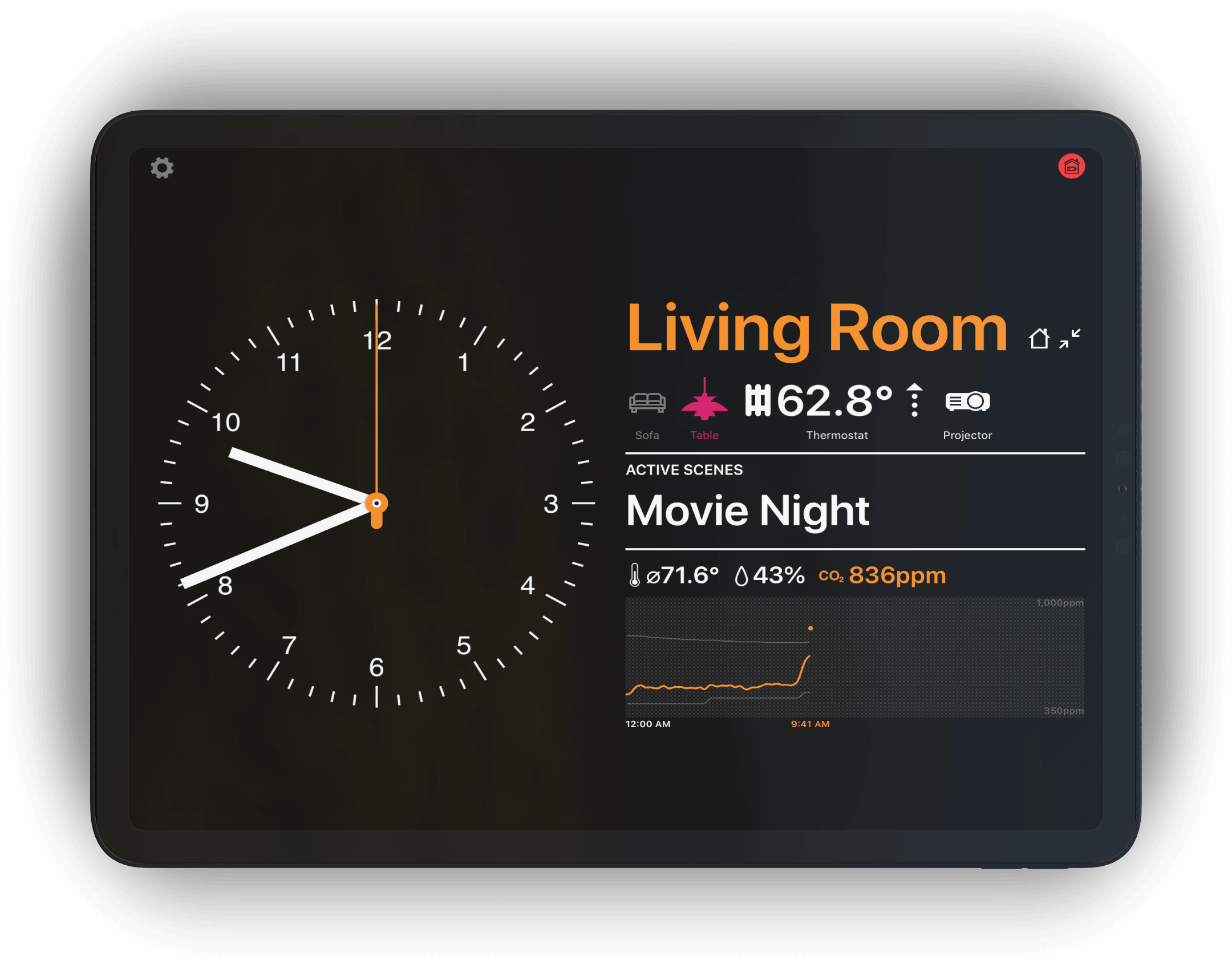 Admit it: Nobody knows how to operate your smart home. You might have lots of apps on your phone to control everything, and you know what to shout at Siri, but does anyone else? You installed smart switches, but who knows what they do on a long-press or doubleclick? And if a smart home is about switches, what was the point of it the first place?

A better way to control your devices is an interactive display on the wall. For decades, established smart home vendors sold those as expensive custom hardware. Wallflower is an app that runs on a regular iPad: Either an iPad Pro, for those who want a fancy and borderless presentation, or an old iPad mini that got resurrected from a drawer. It’s backwards compatible down to iOS 9! And you can also use an iPod touch or an old iPhone.

Like a very fancy lightswitch, Wallflower is designed to control the devices in the room it’s in. Lights, Heating, Switches, all kinds of Sensors, and Scenes. More device types will come in the future, the goal is to support everything that HomeKit supports. This focus on rooms enables a very compact interface: Only the devices that are on are being shown, all others are available with one extra tap. Data from multiple sensors is fused into one singular display.

HomeKit is Apples Platform for the smart home, and the underlying technology for Wallflower. It’s private, encrypted and works locally, even if the Internet is down. Thanks to sophisticated end-to-end encryption and key exchange, nobody but you and the people you invite can control your home — not even the device vendors or Apple have access to your setup. Learn more about HomeKit here.

Philips Hue has an extensive set of lights and switches. They are among the most reliable smart home devices available, and besides bulbs there is a vast selection of lamps for indoors and outdoors that are worth a look — lamps can be a lot brighter than individual bulbs. Learn more…

IKEA puts a lot of weight behind their “Home Smart” series. They have some very innovative products, unbeatable availability and very competitive prices. They are starting to figure out how to make it reliable, too… Learn more…

KNX is the old-school wired system that a lot mostly european manufacturers support. Extremely reliable, but expensive and complex, it’s been the primary choice for intelligent device control for two decades. For KNX to work with Wallflower, you need a HomeKit Bridge, some of which can be found in this list of Bridges.

Eve takes HomeKit very seriously. While other vendors’ devices have their own clouds or APIs, Eve goes HomeKit only. Which means maximum privacy and security, since it involves no cloud, no additional access and no accounts. Learn more…

HomeBridge connects everything that does not (yet) speak HomeKit. Admitted, it requires a bit of work, and a spare Raspberry Pi running in your network, but if you consider your smart home setup a hobby, this is fun getting into. Learn more…

A Good Roommate is a Discrete Roommate.

With Wallflower, an iPad on the wall becomes a part of your home. That is a high bar to clear, and Wallflower does a few things to get it right:

The interface is optimized for being viewed from afar — most times you look at the app, you don’t actually interact with with it. So what you don’t need, isn’t shown. When you stand right in front of it, interactive elements reappear—even before you touch anything, the camera is used to sense uyour presence. Don’t worry: This feature is strictly opt-in and respects your privacy. No data is saved or sent anywhere for this, the image data is discarded immediately.

When the room gets dark, you don’t want the iPad to illuminate your home. iOS has built-in auto-brightness, but with long running applications such as Wallflower, it needs some help to do it’s job. If you opt in, the app uses the camera metadata to figure out if the room is dark and adjusts the light accordingly.

You aren’t the only person in your home: While Wallflower is designed for everybody to control your home, Wallflower protects its settings, so it’s only you who can configure it. Depending on your device, they can be protected with Touch ID, Face ID or Password, and if you leave the settings open accidentally, they’ll close automatically after a while.

Most important: Wallfower is part of your home, so it respects your privacy. That’s not an empty phrase: There is no tracking, no phoning home, no invasive 3rd party frameworks. It uses HomeKit, which runs locally, so it can even control your things when the internet is down. Where’s the catch? If you have a more complex setup, Wallflower is an app you pay for. But before you subscribe, there are multiple ways to try.

Your homes data does not belong in your pocket.

You might have sensors for air quality, temperature, or humidity. Carbon dioxide levels in your home or office closely correlate with your ability to concentrate. You have an app that makes nice graphs of all that data, but each sensor has a different app, and you have to get your phone out of the pocket and start them?

Wallfower combines all data of a room into one graph: Different sensors from different vendors show their data in one combined view. So you can actually see what happens in the data when you open the window. How the room temperature and humidity changes, and how the air quality gets better. And it’s not only you who sees that, so does everybody else.

If things go wrong, you’re no longer the only person who realizes that either: To high Carbon dioxide levels? Too low relative humidity? The batteries in your thermostats are empty? Someone unplugged the iPad from its power source? Your Wifi is down? Wallflower shows handy warnings for things that go wrong. And since a warning about humidity levels makes a lot more sense in your living room than in a sauna, everything concerning sensors is dependent on the room type.